There is a trio of food hotspots in the Marais that form a triangle around the streets of Rue Petit Thouars, Rue de la Corderie and Rue Charles Francois Dupuis. There is l’Ilot, a simple seafood restaurant; l’Aller Retour that serves up steaks in a room that feels a lot like someone’s living room and le Barav, a hipstery wine bar with a casual menu of charcuterie, salads, cheese and the like. Although very different in style, all three have good-value, simply-prepared food and a cool, casual vibe in common. Last weekend we had lunch in l’Ilot and it immediately became one of my top Paris Picks.

It was one of those annoying weather days. When the sun was out it was baking hot, but as soon as a cloud came along the temperature seemed to drop by about 10 degrees. Come lunch time there were more clouds in the sky than patches of blue and so we were happy to bag one of the window seats inside l’Ilot. From our vantage point we could watch the street and enjoy the warmth of the sun but we were spared the cloudy chill. If you sit inside, you have a 4 in 7 chance of getting a window seat as there are only seven tables. There is more seating outside, maybe eight tables, and the terrace (just like the one at Café Philippe down the road) is a bit of a sun trap. 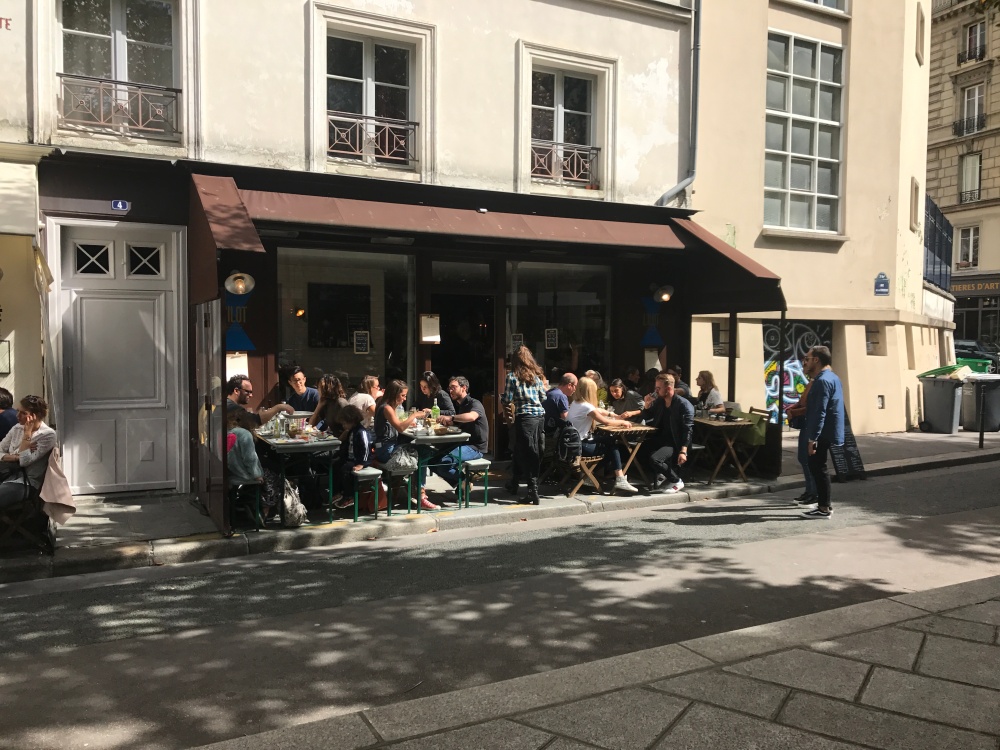 I really believe that no one loves their seafood quite as much as the French. They will pay top dollar for the freshest and the best, but are just as happy digging around in the shells of clams and whelks that sell at the market for pennies. You don’t have to pay through the nose for the seafood at l’Ilot. For somewhere between 5 and 10 euros you’ll get a generous helping of tuna or salmon rillettes, a bowl of prawns or mussels, half a crab or a half a dozen oysters. We shared a crab, which was packed full of meat, a bowl of bulots (whelks), the ceviche du jour and the tuna rillettes. They say that you eat less if you eat slowly because it takes your brain a little time to catch up with the body and recognize that it’s full. Maybe because we took our time picking the sweet flesh from the crab claws, prising the meat from the snail shells and spreading the tuna paté onto little rounds of rye bread, those four dishes felt like a lot of food. 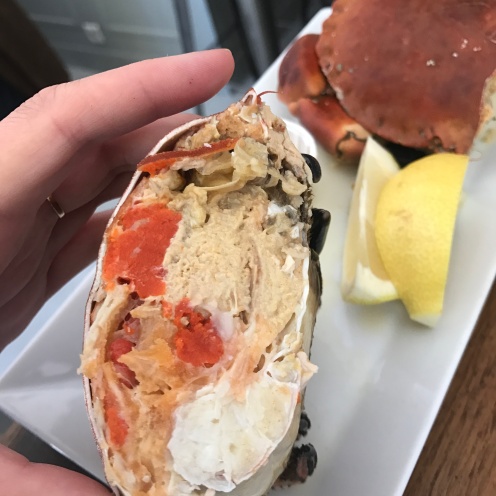 The bulots weren’t my favourite. It was the first time I’ve had them and while they were delicious in flavour, they were a little too solid and chewy in consistency. The ceviche on the other hand was melt-in-your-mouth delicious. The crab was tasty and fun to eat, and the rillettes were the perfect combination of creamy and fishy. Rillettes, by the way, are meat or fish, slowly cooked in fat and then mashed or shredded. The result is a rich and creamy paté. We each had a glass of crisp, cold sancerre – the perfect companion for the delicately flavoured seafood.

That same weekend, we tried out the steaks at l’Aller Retour but I’m going to save that report for a separate post. I’ve had a drink hovering by the bar in le Barav but never managed to get a table to try the food. Judging by the crowds that gather there, I’d be willing to bet that it will end up on my list of Paris Picks, too.