Since we got the flat, we’ve been um-ing and ah-ing over whether or not to get a BBQ for the terrace.  I thought it might get stolen. We might annoy the neighbours (drive them mad with jealousy) with the smells of chargrilling entrecôte. And we weren’t even sure if it is allowed, by the building or the city council.

This weekend, we decided to throw caution to the wind and get one. We chose an electric model, which is less smelly and, we could argue, is just an extension of our kitchen inside. We bought a bike lock to attach it to the railing and asked around about if it is ok to have a BBQ on the balcony. The lady at the fish monger thought it was a wonderful idea.

There’s a little fish stall on Rue Rambuteau where we would always pause to admire the beautiful seafood displayed on a bed of sparkling ice. This was our first stop after buying the BBQ.  The tiger prawns were ridiculously expensive but we couldn’t resist them and bought two each to grill with lemon and chili later on. We needed something else to make a meal. At the fish counter in the Monoprix on Rue du Temple (a recent, much appreciated find) we picked up a bag of fat little sardines for pennies. We would barbeque them with a little oil, lemon juice, salt and pepper. In the fromagerie around the corner, we got a fresh goat’s cheese to have with honey for dessert.

You can cook sardines whole and just eat the feathery bones, but Mr a Little Piece of Paris took the time to butterfly them by slicing them open, squashing them down and pulling out the back bones. They were delicious and we made little sardine sandwiches with rounds of baguette. The tiger prawns were juicy and tasty. Were they worth the price? Probably not, but we were celebrating the arrival of the BBQ and they looked and smelled fantastic.

The next day, we headed to the Marché Bastille in search of more barbequable fare. Still in a fishy mood, we asked the girl at the seafood stall what she recommended. She asked for how many people and selected a plump, shiny, Corsican sea bass (bar in French) from the pile. We marinated it in oil, lemon and a Basque spice mix before grilling for 10 minutes on each side. It was perfect – flaky, juicy flesh and crispy skin.

Artichokes are in season and I just love to eat them dipped in vinaigrette. We got one to have as a starter and, while the fish was on the BBQ, sat on the balcony, peeling off the leaves and nibbling on the ends coated in the honey, mustard and oil dressing. For the perfect vinaigrette, I follow this super-easy and fool-proof recipe by Felicity Cloake.
We finished with some cheese and washed the whole thing down with the drink of the summer, vin rosé. 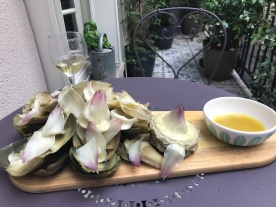 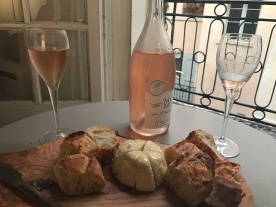 Already it feels like the BBQ was a great investment. The forecast is for rain tonight and so we probably won’t get to grill the entrecôtes we had planned, but I see many more simple suppers in a Little Piece of Paris in our future. Now, I’m off to barbeque some toast for breakfast.